The most famous lighthouse engineers are undoubtedly the Stevenson family, however without the inspiration and assistance of Thomas Smith, who was born in Broughty Ferry: that may never have happened.

Thomas Smith served an apprenticeship as a metal worker in Dundee then went on to set up his own metalworking business in Edinburgh, a business which had amongst its specialities, lampmaking. He experimented with reflectors which brought him to the attention of the Lighthouse board and subsequently went on to construct ten lighthouses around Scotland 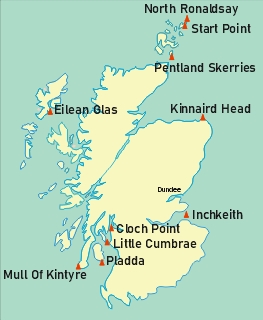 Whilst employed as the engineer to the Board of Northern Lighthouses, Thomas Smith married Jean Lille Stevenson.  He later trained, then entered into a partnership with Robert Stevenson in 1786 and commenced a programme of converting the existing beacons to more reliable oil, and later, gas lamps, all fitted with Thomas’s new and improved reflectors.

Looking to the south banks of the River Tay opposite Broughty Ferry, two lighthouses can be seen on the shoreline near the town of Tayport - both designed and built under the guidance of Robert Stevenson in 1823, but further offshore is one of the Stevenson's most impressive lighthouses - located on a rocky reef called the Bell Rock.

In 1807 work started on the Bell Rock Lighthouse near the entrance to the Firth Of Tay- one of the most advanced feats of engineering ever attempted at that time, and one which propelled the Stevenson’s to fame across the UK.

On an extremely clear day and with the aid of binoculars the Bell Rock lighthouse can just be seen on the distant horizon, but is better viewed from Arbroath where the original construction base for the lighthouse was established. Arbroath’s Signal Tower Museum housed in the former shore station offers a greater insight into the Bell Rock.