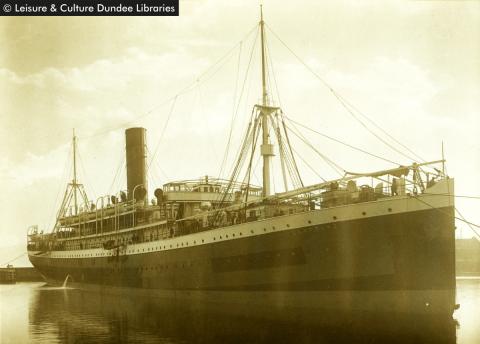 The Lanfranc was built at Dundee's Caledon shipyard and launched in 1906. Measuring 127metres long and weighing around 6287 tons.

Originally serving a passenger service between Liverpool and Brazil, with the outbreak of the First World War it was converted to a hospital ship. The ship however did not survive the war and on the night of 17 April 1917 it was torpedoed by a German U-Boat whilst on route to Southampton. Of the 576 persons on board, some 542 survived the sinking despite the ship descending under the waves in less than an hour after having been struck.

This and other images form a collection which can be viewed in higher quality at the Local History Department of Dundee Central Library, Wellgate Centre, Dundee