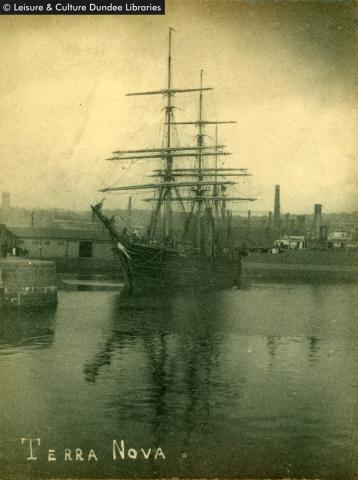 The Terra Nova - built by Alexander Stephens & Sons in 1884.

It is perhaps best known for being the ship that served the British Antarctic Expedition of 1910 - an expedition commanded by Captain Scott.  Whilst the expedition successfully collected a great deal of information relating to Geology, Biology and Meteorology it was overshadowed by the loss of Captain Scott, Lawrence Oates, Edward Wilson, Henry Bowers and Edgar Evans during a trek to the South Pole.

The Terra Nova continued in service, principally around the Arctic waters of Greenland until it sank in 1943.

This and other images form a collection which can be viewed in higher quality at the Local History Department of Dundee Central Library, Wellgate Centre, Dundee