The first lifeboat was stationed at Buddon Ness in 1830 by the River Tay Lifeboat Society.  Another lifeboat was placed at Broughty Ferry in 1859.

Both stations were subsequently taken over from the local Lifeboat Committee by the Royal National Lifeboat Institution in 1861.  The Buddon Ness Station was rarely used and the descision was take in 1894 to close it, with all rescues thereafter to be undertaken from the Broughty Ferry Station.

More details of the Broughty Ferry Lifeboat Station can be found on the RNLI website. The RNLI is a charity which exists for the purposes of saving lives at sea and raises funds to pay for the lifeboats through charitable donations.

The first lifeboats at Buddon Ness were operated by the River Tay Lifeboat Society but funded through a tax levied on vessels entering the river but even before the first official lifeboat in 1830 there are records of rescues having taken place: In 1828 a Daniel Kidd was awarded a Silver Medal and £10 to him and eight other men for the rescue of three of the crew of the schooner Fancy  which was wrecked off Broughty Ferry on 9th February 1828.

Another Silver Medal was awarded to Coxswain James Coull and Bronze Medal to Acting Second Coxswain George B Smith and Motor Mechanic John Grieve aboard the Lifeboat Mona. This was for the rescue of nine from the steam trawler Quixotic which had run aground onto the Bell Rock on 5th December 1939. (Due to the outbreak of the 2nd World War the Bell Rock Lighthouse was not illuminated). Weather that night was poor with high seas and squalls of sleet adding to the danger of the reef itself

The Lifeboats which have been stationed here are: 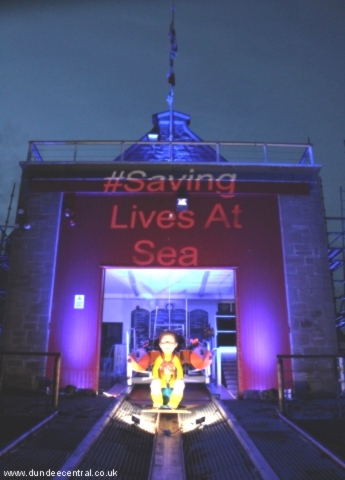 In addition to the lifeboats - the station at Broughty Ferry is also home to "Oor Lifesaver" - a five foot tall statue of Oor Wullie in RNLI attire. Oor Wullie is an iconic Scottish comic strip character and the statue was purchased by the station thanks to a community crowdfunding project.