What's in a name? Dock Street was once at the shoreline of the City with direct access to the Earl Grey Dock and King William IV Dock and space for trains to go along the street to service the ships. 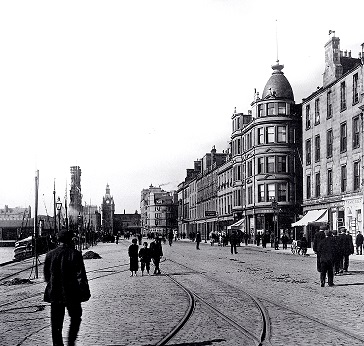 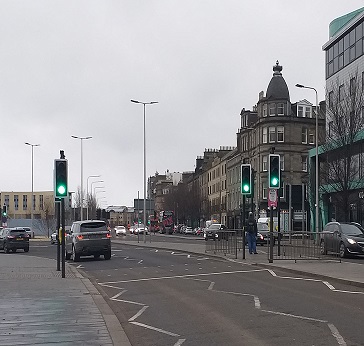 Along the Street there would have been many businesses directly associated with the maritime industries, a few notable places include:

(now known as "The Shore" which contains a youth centre) - built around 1828 it held a meeting room, library and reading room for the merchants of the City.

On this recently built tenement block (near the electric car chargers), are a series of small pieces of public art in the form of knots which would once have been a common sight when this area was occupied by the docks and sailing ships. 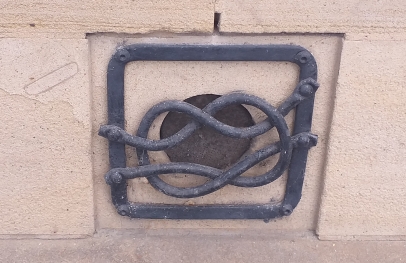 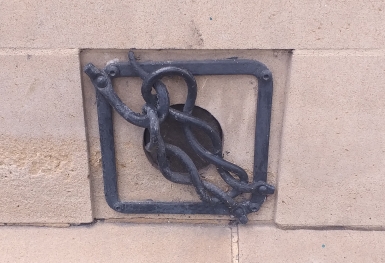 Dundee’s principal concert venue was designed by City Engineer James Thomson and is named after Sir James Caird who made his fortune through the Jute trade in Dundee and donated £100,000 towards its construction.

King George V and Queen Mary laid the foundation stone of the hall in 1914 by an electric press button from the Caird Ashton works in Hawkhill. The buttons were formed from large pieces of emerald and jade – The emerald was one of the world’s largest. Although the emerald was presented to the King as a gift, he handed it back and it is now incorporated into the Lord Provost’s Chain of Office.

James Caird’s name will be forever linked to an epic story of survival on the seas. The James Caird was the name of a lifeboat aboard the ship Endurance during the Imperial Trans-Antarctic Expedition (1914-1917).

During the expedition the Endurance was crushed by pack ice in the Weddell Sea forcing the crew to abandon ship. In order to arrange the rescue of his crew, Sir Ernest Shackleton and five companions sailed the James Caird lifeboat for around 830 nautical miles (1,500km / 920miles) over the southern ocean. It is arguably one of the most remarkable journeys of all time undertaken by a small boat. The Lifeboat is preserved today at Dulwich College, London.

Once located where a car garage stands today:  The Station was opened in December 1857 and served the public for more than a century but it was not the first station on this site. In April 1840 the Dundee & Arbroath Railway Company extended its route from Stannergate to near the foot of Trades Lane. A large wooden structure was built but with little to commend it. By contrast the new East Station was a great improvement with all the facilities that its predecessor had lacked. 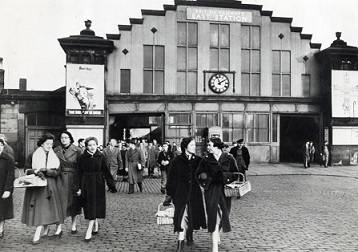 By the early 1840s trains were running to Forfar via Arbroath with a service to Montrose following in 1850. Following the construction of Dock Street Tunnel and a new coastal route north of Arbroath, a journey to Montrose became more conveniently available from Tay Bridge Station (where the current Dundee Railway Station is now). The original inland route remained for a time but was withdrawn in 1906. A further service began in November 1870 with the opening of a new branch railway between Broughty Ferry and Forfar, including a new station at Barnhill.

The late 19th century saw a considerable growth in commuter traffic with ever greater demands placed on the station especially at peak hours. In the summer months extra trains were added for holidaymakers and larger booked parties with an additional booking office placed outside on the street.

Several well known figures made use of the station over the years including Royal Patronage. The future King Edward VI, then Prince of Wales was greeted by huge crowds upon his arrival in September 1864. Thousands lined Dock Street in June 1949 as Queen Elizabeth, the Queen Mother boarded the royal train following her visit to a highland show on Magdalen Green.

After World War 2 the distinctive glass facade was showing its age and was replaced with a simpler wooden screen. Passenger services were withdrawn from the Forfar direct route in January 1955. Station closure followed in January 1959 with the last train leaving for Arbroath. Thereafter all remaining services were transferred to the Tay Bridge Station.

What's in a name? Dock Street is an obvious one, but many other streets reflect on Dundee's maritime past - read more here