For centuries, the harbour was where Dundee met the world. In 1911, the artist John Duncan described his childhood memories of this unique, cosmopolitan environment:

"Strange ships from many strange places; huge swollen Dutch hulls that looked too lazy for anything but a canal, and lean sea-going ships; and full of foreign folk; swarthy creatures like pirates from the Spanish Main; Chinamen and Hindoos, and an occasional Lapp; lanky blue-eyed Scandinavians talking together an unintelligible tongue. And the queer rigging, and the carving, the figureheads, and windows in the stern, the gilding, and the paint, and the whitewash, and the tar, and the moving water that caught all this picturesqueness, and shook it into twisting Chinese dragons of liquid dancing fire. What a wonder it all was, what a delightful place for a Sunday afternoon." 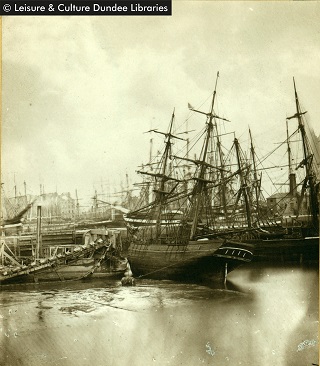 The harbour was central to Dundee’s growth as a commercial centre. It grew on a sheltered position on the Tay estuary, with a promontory called St Nicholas Craig helping to shape a natural harbour between the river and the sea. Its importance was already recognised by 1190, when Earl David was granted “superiority” over the town and the harbour. The first documented reference to a built harbour is found in 1447, when King James II passed a law allowing a tax to be levied on vessels to provide money for its repair.

By the early 17th century, the harbour was well used by ships travelling to and from the Baltic, but the 1651 Civil War siege and freak weather events in 1688 and 1755 were major set-backs to further development. In the 1770s, significant land reclamation took place and a new platform created for the main Craig Pier. The harbour now had capacity for around 200 ships, and a distinct maritime quarter had developed beside it, with high-status homes for shipmasters and a growing number of trades provisioning the ships and their crews. New civic buildings appeared on the waterfront such as the Seamen’s Hall and Yeaman Shore Theatre, and new wider streets were built linking the harbour to the town, including Crichton Street and Castle Street.

In the early 19th century, a bitter dispute developed between the merchants and the town council. By 1805, shipping was 350% greater than 30 years before, but only a quarter of all money the council earned from shore dues was reinvested in the harbour itself. The merchants claimed that “the very existence of this town as a flourishing sea port” was under threat, and they rejected the council’s limited plans (drawn up by engineer Robert Stevenson). 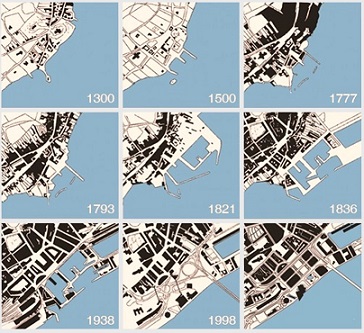 In 1815, control of the harbour was taken away from the council and temporarily passed to a new independent Harbour Commission. They appointed Thomas Telford to design a new West Graving Dock (opened in 1823) followed quickly by the first wet dock (later known as King William IV Dock), allowing maritime trade to increase exponentially. In 1828 it was claimed: “By the united efforts of the Merchants and Shipowners, the Harbour has been brought to its present state of perfection”. In 1831 a Dundee Harbour Trust was established to assume permanent management of the harbour. They continued the development, constructing the Earl Grey Dock, Camperdown Dock, Victoria Dock and East Graving Dock over the next five decades. Major new civic buildings were also constructed, including the new Customs House in 1842.

As ships grew larger and heavier, the harbour faced a problem of low water depth and a shortage of quayage space. To combat this, the Harbour Trust extended the Western Wharf and built a second Eastern Wharf, completed in 1909 and the first in Scotland to use reinforced concrete technology. Further land was reclaimed in front of the Victoria and Camperdown docks to provide deep-water accommodation for larger steam-powered vessels. The rise in jute imports created demand for further space, and in 1903 work began on what was to become the George V Wharf, though it was not completed until the 1930s. 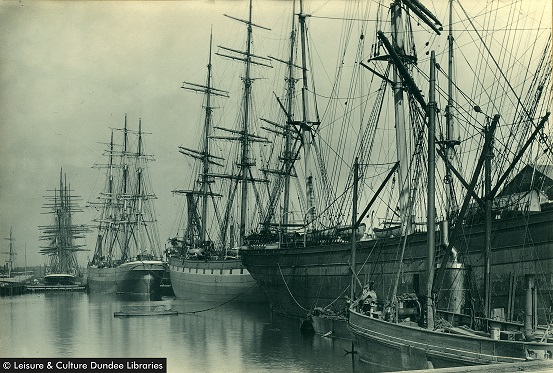 The rest of the 20th century saw significant changes with the building of the road bridge, the end of the Tay Ferries and the slow but relentless decline of the jute trade, the shipbuilding industry and the coastal shipping trade. In the 1990s, the Victoria Dock area was redeveloped as City Quay, and in 1995 the Port of Dundee was acquired by the Edinburgh-based company Forth Ports.